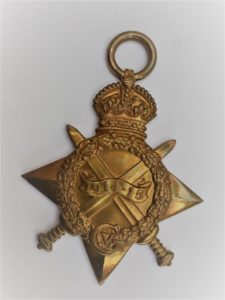 Unfortunately the inscription is

A friend and colleague named only as R.W.S. [presumably 2154 Pte Softy, Raymond W. also of the Post Office Secretary’s Office] wrote the following appreciation of Mervyn which was published in the North Devon Journal three weeks after his death. “

IN MEMORIAM – Eulogy written by a colleague R.W.S

I first met him when he came to our office, seven years ago.  He was quiet and did not intrude at all into any of the little circles that we belonged to, but if I remember rightly he first came forward to do me a service.  It was characteristic of him that he was there, to help, when wanted; and we soon came to know him well – and to know him was to love him.
He did not change as time went on. He was always kind and straight. If a new man, rather awkward, came to us, it was Mervyn who put him at ease. If a refractory messenger had to be dealt with, Mervyn, again, was the man to do it – not by bullying, but by a subtle something that made everybody in the place ready to do anything for “Mr Roach”.
So it was that when war broke out he was the first of them all to volunteer for foreign service. He deemed it his duty, and that was sufficient. Training in England, fighting in France, he always steadfastly followed the light of duty, not noisily nor ostentatiously, but quietly and instinctively, in a way that encouraged the weak and shamed the shirker.

His wonderful unselfishness never failed. I have known him to cheer others far less wet and weary than himself, and many and many a time he has sacrificed his comfort for that of some newcomer.
He was finer than ever in danger; and the night he was chosen for the post of honour and danger in the bayonet charge, he answered his name cheerfully and at once set about the necessary precautions. I know this – that not one of the men with him would have wished for any other leader. They trusted Mervyn.
He bore his agony as only a brave man could. As we carried him out he spoke cheeringly and hid his pain, and when he died, in the prime of young manhood, as fine and unstained a soul went to God as ever dwelt on Earth.

For his dear ones, the bitterness must surely be mixed with solemn pride at his noble life; for his comrades, there will be empty longings for the kind voice and the strong hand of him they loved and trusted; but for them, as for all, there is his shining example. A nation that produces such men is immortal.  Let us be worthy of it, and of him.

His life was gentle, and the elements so mixed in him, that nature might stand up and say to all the world –

Dear Mr Barrett:-
I have been in Flanders and Belgium for the last nine months and constantly on themove as I am in the Motor Transport ——–
I cannot tell you how extremely sorry I was to hear of the death of my old school chum Mervyn Roach, and you also must feel it losing one of your “Popular Boys”. I remember those good time we had together in our old school as if it was only yesterday.——
I have enclosed a poem written by one of Mervyn’s regiment and it will give you a little idea of what the many others have done and are doing for their dear old country and those they love so well.
Yours sincerely

“On Parade- get your spade,
Fall in the Shovel and Pick Brigade”
There’s a Carry Fatigue for half a league, and a trench to dig with a spade.
Through the dust and ruins of Ypres town
The “Seventeen Inch” still battering down
Spewing death with its fiery breath
On the red, red road to Hooge

Who is the one whose time has come,
Who won’t return when the work is done,
Who will leave his bones on the blood –stained stones
On the red, red road to Hooge?

Onward the “Londons”- never a stop
To the Sand-bagged Trench and over the top.
Over the top- if a “packet” you stop
On the red, red road to Hooge.

The burst and the roar of a Hand Grenade
Welcome us onto the death Parade,
The Pit of Gloom- The Valley of Doom,
The Crater- down at Hooge,

Full many a soldier from the Rhine
Must sleep tonight in a bed of Lime,
‘Tis a pitiless grave for a Brave or Knave
Is the Crater-down at Hooge?

Hark to the stand to Fusillade,
Sling your Rifle, bring your spade,
And fade away-ere break of day,
Or a hole you’ll fill at Hooge,

Not a deed for the paper man to write,
No glorious charge in the dawning light,
The “Daily Mail” won’t tell the tale
Of the nightwork out at Hooge.

But our General knows it- and his praise we have won,
He’s pleased with the work the “Londoner done
In the shot and shell at the gate of Hell,
On the red, red road to Hooge.

And finally an extract from a letter home (to Mr Geoorge Mogridge, 47 High Street, Ilfracombe- a butcher) written by Cam Wood and dated 30th May)

We haven’t had our boots off or washed or shaved for a week or so –you can realise what we feel like………. I passed Mervyn in the trench yesterday, and he was looking very fit.